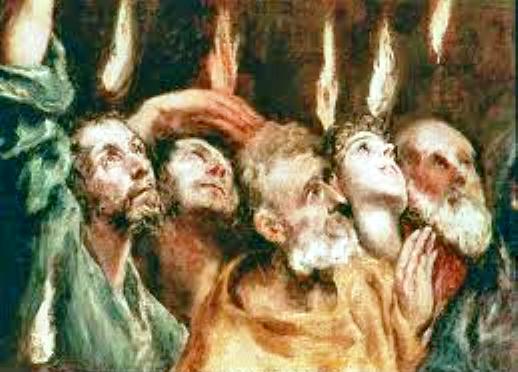 Is speaking in tongues we hear in the majority of Charismatic and Pentecostal churches, today, the true gift of Bible tongues? The Apostle Paul said “…God is NOT the author of confusion.” 1 Corinthians 14:33

This ecstatic gibberish can also be found in many cults of the world. Jesus said…

“Sanctify them through thy truth: thy word is truth.” John 17:17

Not only that, but the majority of people who hear someone speaking in ecstatic tongues have no idea what they are saying, and God is not glorified through it. So what was the original purpose of it? We know that true Bible speaking in tongues had a purpose from God, as we will discover, but I just don't see any point or purpose to the ecstatic tongues that are heard throughout many churches, today.

Part of the problem is that many Christians are too busy seeking for signs and wonders, just like the Jews did in the days of Christ Jesus. Scripture says, "the Jews REQUIRE a sign" (I Corinthians 1:22), like God gave them a sign through Moses (Exodus 4:6-9).  We are too wrapped up in "feelings" to hear the plain truth from God's word about this subject. Do you want to know the Bible truth about the gift of speaking in tongues, even if it goes against your personal feelings? I hope so! Never forget that we live in bodies that are sinful and are dying, and we are at war with a spiritual enemy that can put thoughts—wrong thoughts into our minds. So we should never base anything on what we "feel." Rather, we should base everything on the word of God. Jesus said…

“Man shall not live by bread alone, but by every word that proceedeth out of the mouth of God.” Matthew 4:4

What Does the Old Testament say About Tongues?

“By these were the isles of the Gentiles divided in their lands; every one after his tongue, after their families, in their nations.” Genesis 10:5

So right from the start, in the book of Genesis, we can see that the word tongues simply means languages. People speaking in their own tongues were basically speaking in the language of their land. Obviously before Babel, everyone spoke the same tongue (language).

“And the LORD came down to see the city and the tower, which the children of men builded. And the LORD said, Behold, the people is one, and they have all one language; and this they begin to do: and now nothing will be restrained from them, which they have imagined to do. Go to, let us go down, and there confound their language, that they may not understand one another's speech.” Genesis 11:5-7

Do you see what God did? He confused their tongues (languages), so that they could not communicate with each other anymore, and the building of the great tower of Babel had to stop. This, also, caused mankind to scatter across the earth, among people who spoke their own tongue (speech).

Now a long time after this, when God had brought the nation of Israel out of Egypt, look at what God said would happen, had disobeyed His commandments...

“The LORD shall bring a nation against thee from far, from the end of the earth, as swift as the eagle flieth; a nation whose tongue thou shalt not understand.” Deuteronomy 28:49

The world was now filled with people who spoke different tongues (languages). And, because of the Israelites rebellion against God, He decided to bring another nation against them, whose tongue they would not understand. Now, would this other nation be speaking in some "heavenly" ecstatic utterances? No, of course not. They would simply be speaking in another language. Just like the different languages (tongues) we have all around the world, today.

“Children in whom was no blemish, but well favoured, and skilful in all wisdom, and cunning in knowledge, and understanding science, and such as had ability in them to stand in the king's palace, and whom they might teach the learning and the tongue of the Chaldeans.” Daniel 1:4

Can there be any misunderstanding about the word tongue in the Old Testament? What would speaking in tongues mean in the Old Testament? It simple means speaking in the language of the nation you are from; the tongue (language) that God gave us after the tower of Babel. So, if you applied this to the gift of tongues in the New Testament, what do you think it would mean? Would it not mean that God would give His people the gift of speaking in tongues (languages) to be able to communicate with different nations, for the spreading of the gospel of Christ?

The Gift of Tongues in New Testament

Speaking in tongues is deeply involved with the great commission that Christ Jesus gave to His disciples before He ascended to heaven. Take a look at what Jesus said to them about speaking in tongues:

“And he said unto them, Go ye into all the world, and preach the gospel to every creature. He that believeth and is baptized shall be saved; but he that believeth not shall be damned. And these signs shall follow them that believe; In my name shall they cast out devils; they shall speak with new tongues.” Mark 16:15-17

This is the great commission. So, what gift would the disciples need in order to preach the gospel to these different nations? They would need the gift of tongues, to be able to speak the various languages of the world. Now ask yourself, were the disciples trained in speaking different languages? No, they would need to be filled with the Holy Spirit to start speaking in tongues (languages) to preach the gospel. And, Jesus told them to wait in Jerusalem for the power of the Holy Spirit, which would empower them to start speaking in tongues (different languages):

“And, behold, I send the promise of my Father upon you: but tarry ye in the city of Jerusalem, until ye be endued with power from on high.” Luke 24:49

This is why the disciples were all gathered in Jerusalem. They were waiting for power from on High, as Jesus told them to. The gift of speaking in tongues was given on the day of Pentecost in the upper room, where they were gathered…

“And when the day of Pentecost was fully come, they were all with one accord in one place. And suddenly there came a sound from heaven as of a rushing mighty wind, and it filled all the house where they were sitting. And there appeared unto them cloven tongues like as of fire, and it sat upon each of them. And they were all filled with the Holy Ghost, and began to speak with other tongues, as the Spirit gave them utterance.” Acts 2:1-4

The Purpose of Speaking in Tongues

“And there were dwelling at Jerusalem Jews, devout men, out of every nation under heaven. Now when this was noised abroad, the multitude came together, and were confounded, because that every man heard them speak in his own language. And they were all amazed and marvelled, saying one to another, Behold, are not all these which speak Galilaeans? And how hear we every man in our own tongue, wherein we were born? Parthians, and Medes, and Elamites, and the dwellers in Mesopotamia, and in Judaea, and Cappadocia, in Pontus, and Asia, Phrygia, and Pamphylia, in Egypt, and in the parts of Libya about Cyrene, and strangers of Rome, Jews and proselytes, Cretes and Arabians, we do hear them speak in our tongues the wonderful works of God.” Acts 2:5-11

God used the gift of tongues, here, so the Jews from one nation (Galilaeans—Acts 2:7) could preach to Jews of other nations (who spoke in different languages—tongues) so that they might understand the message. Remember, the Jews require a sign (I Corinthians 1:22) and God gave them one (1 Corinthians 14:22).

Speaking in Tongues After Pentecost

“While Peter yet spake these words, the Holy Ghost fell on all them which heard the word. And they of the circumcision which believed were astonished, as many as came with Peter, because that on the Gentiles also was poured out the gift of the Holy Ghost. For they heard them speak with tongues, and magnify God.” Acts 10:44-46

So the Gentiles were given the gift of speaking in tongues. But, what tongues were they speaking? Were they speaking ecstatic tongues like so many do today? No, the gift of tongues that they were given was to speak in other languages, and the Jews heard the Gentiles give glory to God in their very own language. Peter confirms this point when he went back to Judea to tell of the story:

“And as I began to speak, the Holy Ghost fell on them, as on us at the beginning [Pentecost]. Then remembered I the word of the Lord, how that he said, John indeed baptized with water; but ye shall be baptized with the Holy Ghost. Forasmuch then as God gave them the like gift as he did unto us, who believed on the Lord Jesus Christ.” Acts 11:15-17

Do you see what Peter is saying about these Gentiles speaking in tongues? He confirms that God gave them the VERY SAME gift as He did the disciples on the day of Pentecost. What gift? The gift of speaking in tongues. And, what were the tongues that the disciples spoke on the day of Pentecost? Different languages! It's that simple! This gift of tongues was certainly not the ability to speak ecstatic tongues that no one could understand, because God could not be glorified that way.

What Does Paul say About Speaking in Tongues?

So Paul attributes speaking in different languages as speaking in tongues. This is Bible truth! Paul tells us the purpose for the gift of tongues…

Did you catch that? Paul says that the gift of speaking in tongues is for a SIGN to those who don't believe. This makes perfect sense when you think about what happened on the day of Pentecost, because the Holy Ghost gave the disciples the gift of speaking in tongues and the people there could hear them speak in their own language. Many of them believed the gospel and 3000 people were saved that day.