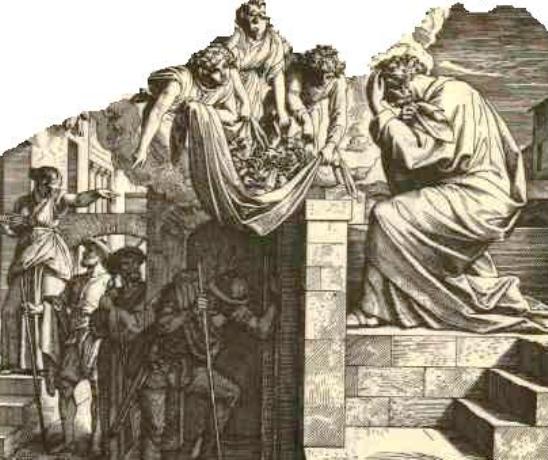 Acts 10:1 There was a certain man in Caesarea called Cornelius, a centurion of the band called the Italian band, 2 A devout man, and one that feared God with all his house, which gave much alms to the people, and prayed to God alway. 3 He saw in a vision evidently about the ninth hour of the day an angel of God coming in to him, and saying unto him, Cornelius. 4 And when he looked on him, he was afraid, and said, What is it, Lord? And he said unto him, Thy prayers and thine alms are come up for a memorial before God. 5 And now send men to Joppa, and call for one Simon, whose surname is Peter: 6 He lodgeth with one Simon a tanner, whose house is by the sea side: he shall tell thee what thou oughtest to do. 7 And when the angel which spake unto Cornelius was departed, he called two of his household servants, and a devout soldier of them that waited on him continually; 8 And when he had declared all these things unto them, he sent them to Joppa.

God was so happy with Cornelius’s intent on believing, He said to Himself, “I want to save this man. I sent my Son, Jesus, down to die for his sins. I know if he will hear… if he will just hear one time, I’m sure he will get saved. Oh, how I desire to have him with Me in Heaven.” Then, the Lord thought, “Who’s the best man for the job?” Without hesitating, He exclaimed “Peter is!” Determined to use Peter, He said, “This is what I’ll do. I’ll call Peter to bring My message of Salvation to him. I’ll tell Peter to use the other Key. After all, he’s My head Apostle. I’ll use him.”

Acts 10:9 On the morrow, as they went on their journey, and drew nigh unto the city, Peter went up upon the housetop to pray about the sixth hour: 10 And he became very hungry, and would have eaten: but while they made ready, he fell into a trance, 11 And saw heaven opened, and a certain vessel descending unto him, as it had been a great sheet knit at the four corners, and let down to the earth:12 Wherein were all manner of fourfooted beasts of the earth, and wild beasts, and creeping things, and fowls of the air. 13 And there came a voice to him, Rise, Peter; kill, and eat.

And, just when everyone thought that Peter would have followed through with the Lord’s wishes—let’s face it, this wasn’t just a man that asked, it was the Lord, “…Peter said, Not so, Lord; for I have never eaten any thing that is common or unclean.” (verse 14)

Then the Lord said to himself “Oy, I picked this man to bring my message, what was I thinking.” He did it a second time…

15 And the voice spake unto him again the second time, What God hath cleansed, that call not thou common.

You know the story… “This was done thrice: and the vessel was received up again into heaven.” (Verse 16) God had to give Peter the same message three times, because he wouldn’t do it once.

This message isn’t about salvation, nor is it about rightly dividing the word of truth, it’s about saying “No” to God. Even though, at one time or another we all say “No” to God, this message is about (and directed to) preachers.

In this case God was asking Peter to go in his pocket to pull out the second key—the key that opened the door to the Gentiles (Matthew 16:19), and Peter said, “No.” “Not so, Lord….” What a contradiction of terms. “I call you ‘Lord,’ but I won’t do what you are asking me to do.” Isn’t that what’s going on here? [Addressing Christians…] Oh, I suppose you’ve never done that before, have you? You’ve never asked God for His will, and when He showed it to you, you turned right around and said “No” to it. You have never done that, have you? I’m just trying to put this all in perspective. Didn’t Jesus say Luke 6:46? We can say all we want to about preachers, but once the finger goes in your face, Christian, it’s a different story. Hypocrite. You mean God can tell you to do something, and just because you aren’t called into office, you aren’t accountable? …You mean, God won’t see?

Let’s walk away from this story and look at another familiar one. You know the story; everyone knows the story. Jonah.

Peter was told to preach to one man, and he refused. He refused because of his religious conviction. Jonah was, also, told by God to preach (not to one, but) to thousands. What did Jonah do with his calling? He did what Peter did. He said “No way, Lord.” But, it didn’t stop there. He took the first boat out of town.

That’s it. We all know the story, already; we don’t have to read any more. There's no more to say. Jonah ran away from God’s will. God said, “Do this,” and Jonah said “No.” (He really didn’t say anything; he just went the other way.) He went against God’s will. Look at verse three. He actually paid to go against God’s will. He bought a ticket. He held the ticket up to the Sunlight and said, “This will get me out of it.” Holding that ticket up over his head, he actually made that ticket his god. He continued, “I don’t have to do God’s will, now. I even have a piece of paper that says so.”

If we look at the city of Nineveh (where God commissioned Jonah to go) and the city of Tarshish (where Jonah was fleeing to), they were exactly in opposite directions. If my calculations are correct (now, don’t quote me, this is very obscure, since the names changed, etc…;), Nineveh is about five hundred miles (of land) from where Jonah was commissioned to go, to deliver God’s message. And, Tarshish (there are two places by that name. From the starting point, after twenty miles of land travel to the coast, they both can be reached by water. One is two hundred miles away and the other, two thousand.)

Well, as you know, if you ever read or heard the story before, Jonah didn’t get too far in that boat headed away from God’s will before He turned up the air velocity. Verse four says, “But the LORD sent out a great wind into the sea, and there was a mighty tempest in the sea, so that the ship was like to be broken.” Preacher, though lying on a hammock, pointed in the cool smooth waters away from the will of God might make you believe you have reached your goal of thwarting His will, but I got bad news for you, all He has to do is turn up the wind to get your attention.

That's exactly what He did.  Read verse five with me “Then the mariners were afraid, and cried every man unto his god, and cast forth the wares that were in the ship into the sea, to lighten it of them. But Jonah was gone down into the sides of the ship; and he lay, and was fast asleep.” These men knew something was up. Though they didn’t have Jehovah as their God, notice they knew it was time to pray. Notice: they “cried every man unto his god.” They called on Mary, Mohammed and Zeus to intervene. Then they asked Jonah... "Preacher, why won’t you call on your God?"  Here's a thought, do you know the moment Peter said “No” to God, it not only affected him. It, also, affected Cornelius. Peter literally had Cornelius’ life in his hand—his ETERNAL life.  The moment Jonah boarded the boat, it stopped ONLY affecting him.  It affected every man and woman (if there were any) on that boat.  How many people have you dragged into your disobedience that are ignorant of what’s going on? No one, but you and God, knows what He has called you to do. If it’s too late to turn the boat around, why don’t you ask to be thrown off it, like Jonah did? Why not be honest.  Listen to what Jonah said, “Listen fellas, you are going through all this trouble because of me.” (Jonah 1:6-12)

Listen, as I close this message. You preachers, listen. Even when Jonah did what God told him to do, unless you have a good heart about doing the will of God, you are going to wind up in the same place you were, right before you got sidetracked in your disobedience.  When Jonah finally obeyed, didn't many people repent and get saved from God’s wrath? Sure. There might have been anywhere from a third to a half a million people (Jonah 4:11) But, at the end of the journey, Jonah wound up with the same attitude he started with, before it began.

“And it came to pass, when the sun did arise, that God prepared a vehement east wind; and the sun beat upon the head of Jonah, that he fainted, and wished in himself to die, and said, It is better for me to die than to live.” (Jonah 4:8)

Preacher, Christian, unless you are going to do everything the Lord has called you to do, WITH a good heart, you will never be successful in the will of God. Please, be consistent. When God shows you something or wants to show you something, always say “Yes, Lord, thy servant heareth.” And, then be prepared to do what He calls you to do.