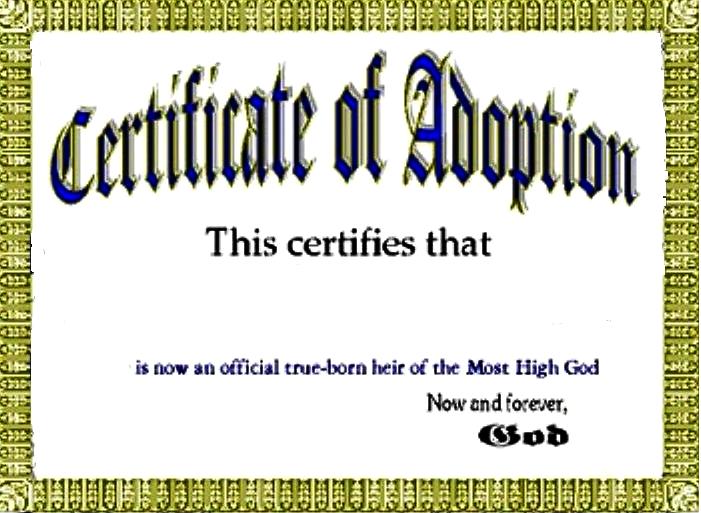 I learned, yesterday, from a worried mother, of young married couple that has some paperwork issues about adopting a one day old baby. It got me to thinking… “How much paperwork did God file to adopt me into His family as His child?”

Here is the question again, but this time I will include all my brothers and sisters into the equation…

How much paperwork did God have to file to adopt us into His family so that those of us who do have the proper paperwork can claim Him as our own?

If you haven't already guessed, I'm speaking about the Bible. The Bible is God's voluminous treatise that tells us how we got adopted into His family.

While I continued to ponder this subject I remembered that I wrote all about it already in my book, called “The Golden Sceptre.” Though the main theme is different, the subject matter is the same.  It's about how we got the written word of God.  In this case (the one you are about to read), though, I'm referring to the Old Testament, since it is dealing specifically with the birth of the Messiah.

Here is what I wrote. I hope you enjoy it. The chapter subtitle is called…

“Off to Save the Planet”

God had a wonderful plan to save this planet from the hand of the enemy. In fact, it was simple. He would send them a HERO. That hero would be known as “The Son of God.” There was only one problem with this plan: If no one knew who He was, who would RECOGNIZE Him when he showed up?

A subsequent plan had to be drawn up. More had to be known. Questions needed answers, and information supplied. Who would know ALL the facts? Who would live long enough to give them out?! A shout was heard near the back of the auditorium. Someone yelled out, “I got the answer!” Then another cried, “GLORY!!” The moderator stepped closer to the microphone to summon the reply. All Heaven and Earth stood silently by as he gestured for the answer. These were the words they heard: “A BOOK. Write the information in a Book!”

The plan was set in motion... “In the beginning God created the heaven and the earth....” That was a good start, but more work had to be done, much more!

It was decided that this Book would become a big Book with many smaller ones inside. In all, they would number thirty-nine. (II Corinthians 11:24) One less than forty would be sufficient. To show the inhabitants their condition, it was further decided to end this Book “...with a curse....” (Malachi 4:6b)

“...Watching daily at...” his “...gates...” (Proverbs 8:34), another decision was made. This Book had to be completed four hundred years before our Hero’s birth. That would give these men time to study it, and see what was written inside.

Century after century, newly written pages were being compiled. This Book was getting bigger, a lot bigger! Soon the quota would be met, but not today. Today, more letters had to be etched out, to complete even more words. Those words turned into sentences, and those sentences into paragraphs. Finally, those paragraphs became whole chapters—which ended this arduous task.

At last, this Manuscript was complete. All those Books were now made ONE.

Wisely, men began to review it. They were amazed at what they saw. No matter where in The Book they turned, word pictures began to appear. There was no mistake about it: These pictures RESEMBLED God’s Son. So ingrained was His image, they later made it His name, by dubbing Him, “The WORD”. (John 1:1) Even those who chose to reject this Hero had NO DOUBT who He was!! (Matthew 21:33 to 46)

Decidedly, God intended man to know the future. These pictures (now in a book) made it easy. Any agent reading The OLD Testament codebook was now armed with spiritual perception and foresight. This enabled them to see into the future.

The wait was over. The mission was on. Someone yelled out, “It’s a go!” Dispatched from Headquarters, The Messiah would be arriving soon. The agents, who studied the codebook, easily detected Him. Even before He was seen, the radar gun of prophecy had Him on their scope. (See, Matthew 2:4 and 5) Those early sketches had tipped them off! (Luke 1:70) The Book had accomplished its goal!

Today, when we “...Search the scriptures...” (John 5:39a—Jesus was referring to The OLD Testament), we discover our Hero all over again. Could this be the reason we Bible-Believing Christians are so dogmatic, when it comes to that BOOK?! Every time we open It, we SEE Jesus!!!

In Esther’s Book, we see Him in the character of Mordecai: A Jew, who endured temptation directly from the hand of Haman—a type of the Devil, suffering outside the gate to save his people, a close relative to the King’s second wife, who, by the way, got that position by taking heed to him; and, after the battle is ended, gets exalted as the second ruler of the Kingdom. How could anyone who read the New Testament miss this Old Testament picture of Christ?!!!

While we’re on the subject of types, please don’t let the differences throw you. In other words, in The Book of Ruth, Ruth—the Gentile marries Boaz—the Jew, but, in The Book of Esther, Esther—the Jew, marries King Ahasuerus—the Gentile. Keep in mind—till later, Mordecai the Jew doesn’t marry ANYONE! The simple answer to all this is, God gave us two different pictures of the SAME person. The first picture centers on Christ’s First Coming; and the second, around His Second Coming! [That bears repeating; please read that last sentence AGAIN.] The first Book, The Book of Ruth, is a picture of The Kingdom of God. The second Book, The Book of Esther, is a picture of The Kingdom of Heaven. Christians can make DIRECT application to the first picture, but not to the second. Here, the JEW is the SUBJECT, and the focus (of this Book) is on The King’s SECOND wife.