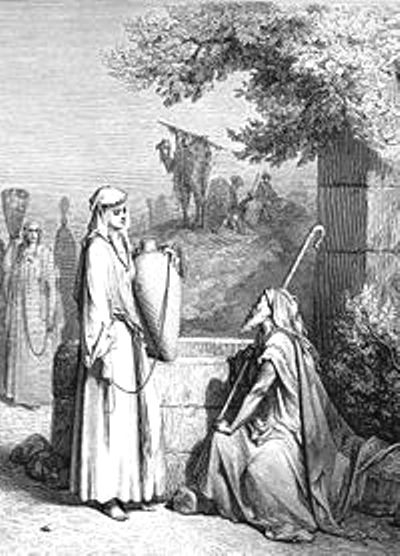 So... I used this particular Bible illustration or “type” on a thread in Facebook to show how someone will know when the right person comes along ...one way they'll be able to tell is that the woman will be willing to follow him. Here’s the verse I used…

"And if the woman will not be willing to follow thee, then thou shalt be clear from this my oath: only bring not my son thither again." Genesis 24:8

Brother (XXXXX) comes on the chat and says…

“The verse is talking about following the servant, not the groom.”

“The ‘servant’ is a type of the Holy Spirit, Brother XXXXX.”

“Exactly why I do not teach typology. It is a stretch by any means. I prefer to stay within the confines of the written Word. It keeps me safe from not adding too or taking away. I respect your point and I am aware that some folks have been taught that way.”

“As long as you respect me, XXXXX, I guess I'll be okay... And, as long as I respect Jesus, I'll be better.

“The Early Christians, in considering the Old Testament, needed to decide what its role and purpose was for them, given that Christian revelation and the New Covenant might be considered to have superseded it, and many specific Old Testament rules and requirements in books such as Leviticus dealing with Expounding of the Law were no longer being followed. One purpose of the Old Testament for Christians was to demonstrate that the Ministry of Jesus and Christ's first coming had been prophesied and foreseen, and the Gospels indeed were seen to contain many quotations from the Old Testament which explicitly and implicitly link Jesus to Old Testament prophecies. Typology greatly extended the number of these links by adding to Old Testament prophecies fulfilled by Christ others based on the mere similarity of Old Testament actions or situations to an aspect of Christ.

Typology is also a theory of history, seeing the whole story of the Jewish and Christian peoples as shaped by God, with events within the story acting as symbols for later events - in this role God is often compared to a writer, using actual events instead of fiction to shape his narrative.

Hence, it was a study created by men because they could grasp the depth of New Testament teaching. All is clearly explained in four verses:

"You mean Jesus Christ was wrong, XXXXX, when He used a type about >Himself< to explain to a sinner what eternal life was like so she would understand it when she received it? {Let's face it, she blabbed to all the men where she lived that she had exactly what Jesus was trying to explain to her in type.} Was that (to quote you) a "theory" of history or was He using history to help her understand it?"

"Since more than four hours have passed and I have received no answer, I though I would at least say who it was that I was talking about for any future on-looker.

The woman is 'the woman at the well' of John four.

The water (once received) that she would never need to drink from again is of course Jesus, the Water of Life.

And, the well was 'Jacob’s well.' Jesus used a piece of history (in this case, a well) to tell this woman, in type, how she could drink and never have to thirst again. This wasn’t a 'theory of history,' as Brother XXXXX suggests, it was a piece of history that Jesus used to help her understand Eternal life. [By the way, Jacob–as in 'Jacob’s well' iss the third triplet mentioned any time God wants to present the line of pedigree in which a true Jew comes from {i.e. Abraham (type of God the Father); Isaac (type of God the son–remember, Jesus was sitting right there explaining all this to her); and, of course, Jacob (a type of the Spirit of God that would satisfy her quench for thirst –spiritual thirst– for Eternity). See Genesis 50:24}.]"