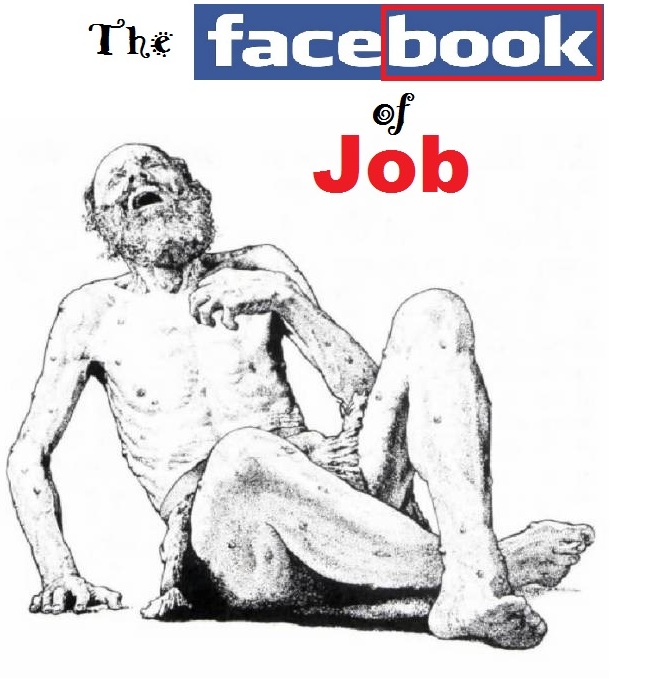 The oldest book in the Bible isn't Genesis, it's the book of Job.

Job was a real person (Ezekiel 14:14, 20 and James 5:11) who went through great testing but couldn't understand why. Since hindsight is always twenty-twenty, even a casual reader of this book can get the gist of this story in the first two chapters. God agreed to put Job to the test in order to evaluate his motives for service. So great was this testing, Job prayed that God would record it all in a book...

God obliged him of his request, and thus the book of Job was written. This book included not only Job's words but the words of his three friends, an initiate named Elihu, Satan's words and of course, summing it all up, God's words.

I've entitled this article “The Facebook of Job” because of a word I found while reading this story through again. I was surprised to learn that, out of the entire Bible, this word is only found in Job's book and it is only spoken by Elihu three times in chapter thirty-two. Here are all three verses. [Before I reveal this word, see if you can spot it by reading the next three verses...]

6 “And Elihu the son of Barachel the Buzite answered and said, I am young, and ye are very old; wherefore I was afraid, and durst not shew you mine opinion.”

10 “Therefore I said, Hearken to me; I also will shew mine opinion.”

17 “I said, I will answer also my part, I also will shew mine opinion.”

The word that stood out to me was the very last word of each of these sentences, the word “opinion.”

Every one has an opinion. Do you know how I found out? I have an on-line facebook group. {Smiley face} As the administrator of this group, I have discovered over the course of a few short years that no matter what the subject is, someone somewhere will give their opinion.

If you read Job thirty-two, you will see why Elihu waited for Job's three friends to finish their dialogue before speaking up. It was simply out of respect for their age and experience. But, once he had the floor, Elihu gave these men “both barrels” of his opinion.

If you think about it, this should all sound familiar to you. Doesn't it sound like what occurs on facebook? If it doesn't to you, it does to me. Every one is jockeying in position to give their opinion. Even those who aren't on a social media to capture their assessments of life express them somewhere. Surely, the necessity to render our opinion must be in our nature. Let's face it, everyone has one (–an opinion, that is) and, depending on someone's personality, most times they will do almost anything to get it out to someone else. Let me ask you, isn't that why we are on all the social medias to begin with? Of course it is. We got an opinion and we want everyone to know it.

If you will allow me at this juncture to ask a different question—a more pressing question, it will help me to make a neat tidy bow of this article while I still have your interest. Here is the question...

Since we ALL have an opinion and, as we read in Job's book, many times one opinion differs from the next person's, does your opinion really count?

That's probably the question I wanted to ask you, but let me intensify my question slightly by asking a still better one, a more suscient one...

Whose opinion really does count?

There, that's a better question.

Let's face it, other than Job's wife who basically told him to give up and die (Job 2:9), there were five differing opinions (one belonging to Job) and six if you count God's. We read in the later chapters of this book that, when all was said and done, Job discovered that all these religious dogmatists were wrong, really wrong. If that's true, why then spend the time it takes to give out your opinion?

Oh my. I went too far by introducing a new question when I never answered my last one. So let me combine the two by asking...

If everyone's opinion (assessment) of Job's situation was wrong, whose opinion really counted?

Let's face it, all of Job's three friends had it wrong...

“And it was so, that after the LORD had spoken these words unto Job, the LORD said to Eliphaz the Temanite, My wrath is kindled against thee, and against thy two friends: for ye have not spoken of me the thing that is right, as my servant Job hath.” (Job 42:7)

...And, we learn that Elihu had it wrong when the Lord says to Job...

In other words, the Lord tells Job “this guy [Elihu] doesn't know what he is talking about.”  Since Elihu just got done giving his opinion (chapters 32-37), it only makes sense that the Lord was referring to him and not to Job.

Last, we learn that, after the Lord gives His opinion about Job's situation, even Job didn't have it right. Job remedied his miscalculation by abhorring himself and repenting in sackcloth and ashes. (Job 42:6)

Before I end this article by giving you the moral to this story, I will raise my question to you one last time...

Whose opinion really does count?

Well, if you haven't already guessed, the answer to this question is God's. His opinion is the only one that matters.

Here is the moral to this and every other story that could be raised...

Just because you have an opinion doesn't mean anything unless it lines up with God's opinion. ...His opinion makes you right every time.