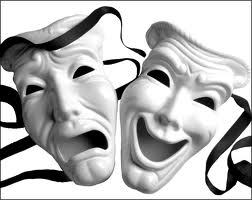 Remember, when we were children, how we used to like to dress up as adults? To us, to be an “adult” was the neatest thing. So, we did the only thing we could. We went through mommy or daddy’s closets and dresser draws to find garments and accessories (like hats and scarves) to drape on our bodies, in front of a mirror, to see how we would look as an adult. “You be the mommy. And, I’ll be the daddy” was heard, millions of times, before someone grabbed a baby doll, to stand in as the baby. We pretended, back then, that we were something we weren’t (yet), because it intrigued us.

Verse one: “Now the serpent was more subtil than any beast of the field which the LORD God had made. And he said unto the woman… ‘Let’s play pretend.’” “Let’s pretend for a minute that mean ole’ God didn’t say you shouldn’t eat of every tree in the Garden. He was just rattlin’ your cage, woman. Let’s see how fun it is to pretend that He really didn’t say it.”

And the woman said unto the serpent, “Okay, let’s play your game. Pretend. I like that. I want to play pretend, too…. ‘We may eat of the fruit of the trees of the garden: But of the fruit of the tree which is in the midst of the garden, God hath said, Ye shall not eat of it, neither shall ye touch it, lest ye die.’ That was fun. Pretending, I mean. He really didn’t say that we shouldn’t touch it. I just added that, in there, to pretend God said it. He’s not that mean, you know.”

Eve: “Sure (yawn), let’s play some more. Adam’s working late, in the Garden. I got lots of time.”

Serpent: “Okay, let’s step it up a little.” “And the serpent said unto the woman, Ye shall not surely die: For God doth know that in the day ye eat thereof, then your eyes shall be opened, and ye shall be as gods, knowing good and evil.”

Eve: “Wow, really? I like this game, Mr. Serpent. Seems, to me, like you played it before.”

Verse Six: “And when the woman saw that the tree was good for food, and that it was pleasant to the eyes, and a tree to be desired to make one wise, she [stopped pretending, because she was too far into the game, and] took of the fruit thereof, and did eat….” Eve actually thought she had gotten away with pretending. Let’s face it, she didn’t die. [Genesis 2:17] The fruit even tasted good. She learned the game well. Now, it was up to her to show it to her stuffy old husband.

Of course we know that “Adam was not deceived, but the woman being deceived was in the transgression.” (I Timothy 2:14) Adam didn’t play any of the games that his Weaker Vessel played. He knew that God had created him in His image, and anything except complete obedience to his Creator would be certain death. We, also, know that Adam pictured the Lord Jesus Christ, who purposely died for His bride.

This game picks up again, in, of all things, Jerusalem, some five thousand years later. Oh, it’s been played every day since Mother Eve agreed to play it with Mr. Serpent. But, now, it’s introduced into a different newly formed body [like, Eve was Adam’s body—Matthew 19:5]. This time, it’s a spiritual body consisting of (not two, but) many [The body of Christ—Ephesians 5:28-32]. Let’s look in the New Testament, where the Church was beginning, in momentum, to grow.

Read Acts 2:41 and Acts 4:4. Notice that three thousand souls were saved. And, then, a short while later, five thousand souls. Men were being born [John 3: 3-7] back (spiritually) into the image of God that Adam lost, from his wife playing the game of pretend, with the Serpent.

Now read Acts 4:31-35. “And when they had prayed, the place was shaken where they were assembled together; and they were all filled with the Holy Ghost, and they spake the word of God with boldness. And the multitude of them that believed were of one heart and of one soul: neither said any of them that ought of the things which he possessed was his own; but they had all things common. And with great power gave the apostles witness of the resurrection of the Lord Jesus: and great grace was upon them all. Neither was there any among them that lacked: for as many as were possessors of lands or houses sold them, and brought the prices of the things that were sold, And laid them down at the apostles’ feet: and distribution was made unto every man according as he had need.”

The Body of Christ was so strong, at this point, that it seemed like nothing could hurt it. Ah, but something did. You guessed it, someone wanted to play pretend.

“Sapphira, you paid all the bills, yet, this month? I wanna see how much I got left over.”

Sapphira replies: “This is the month, Ananias, that the taxes are due. And, lemme tell ya, it’s a whopper. I guess Herod is gonna build some more roads, in the south quarter.”

Ananias: “How ‘bout that property we own, up the road…. How much can we get for that?”

Well, you know the rest of the story. (Acts 5:1-10) Everything is the same, except the characters change. Ananias and Sapphira are both the bride of Christ. Peter stands in for God. [Instead of answering to God (directly), they answer to Peter.] And, Satan (verse three) is no longer masquerading as a snake. He just plain deceives them into pretending to be something they aren’t, SPIRITUAL. Just like Adam and Eve die, spiritually, in the Garden, these two die, physically, “…at the apostle’s feet.” (vs. 2)

I can almost hear them now collaborating to deceive the Apostles…

“Look Sapphira, I donno how long I can keep this thing going …with the economy in a slump, and all.”

Sapphira (in the place of Eve) answers Ananias: “Honey, we don’t need that much extra. Maybe, if we just sell that other property, like everyone else is doing, and pretend to give it all to the church, they will think we are as spiritual as all the rest of them are. Whatdoya say? How ‘bout it?”

The rest, as they say, is history. Someone wanted to pretend to be something they were not. In this case, it was a spiritual matter. How many of us are pretending to look and act spiritual, so someone, we admire, will, in their thinking, elevate us to a prominent position? They did it in Jesus’ day (Luke 20:20—“feign”—pretended), and they do it, again, today. [Here’s a thought: How many men, these days, are pretending to be women, and women, men?  And, while we are on this subject, here's another thought: How many men and women, who do get together, are pretending to be married, so they can have the benefits without the responsibility?] The Devil is sure slick, ain’t he?

Last, just when you think it’s all over, he does it, again, in the future.

Turn to Revelation 20: 1-8. Just when you think everything is going well [like, in the Garden of Eden and at Jerusalem] the Devil is at it, one last time. He stops at nothing “…to deceive the nations which are in the four quarters of the earth, Gog and Magog, to gather them together to battle: the number of whom is as the sand of the sea.” What’s Satan’s tactic to deceiving these nations? Scripture doesn’t say. But, the only thing that makes sense is (you guessed it) pretending. Satan convinces these (heads of) nations to pretend that they are as powerful as the rider on the white horse, in Revelation Nineteen, whose “vesture [was] dipped in blood: and his name called The Word of God…KING OF KINGS, AND LORD OF LORDS.”

Are you pretending to be saved? You might trick a few folks, but God sees right through it.

Are you pretending to be Spiritual? You might trick a few folks, but God sees right through it.

Are you pretending to love God? You might trick a few folks, but He sees right through it.

Note:  Some preachers I know are actually proponents of this type of thinking, when they teach their people, in their churches, to (their term) “fake it ‘til you make it.” For example: Instead of dealing with an issue, right then, they are taught, from the pulpit, mind you, to pretend you are not struggling with an issue, when you really are. Their members are expected to act like everything is fine and look like there is no problem pending (and, no struggle with that particular sin). How will Christians face issues that their own preachers are aiding and abetting, how ever long it takes to make right, to cover up as okay?