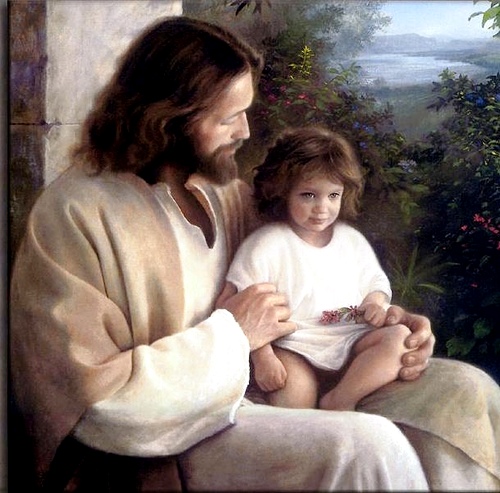 Please share how your child, or children, got saved. How did the conversation go? What age were they? Did they get saved by someone else presenting the gospel? Did you make a note of the date so that they could remember it? And any other details that you can think that would be helpful to share.

Having six children of my own, besides the years I spent as an assistant bus captain and teacher in junior church, it is safe to say the I have some experience with leading children to Christ.

Children come to understand their sin and their need to be saved at different ages. We saw this in our family. One was saved at age five and never once had any doubts about his salvation, while another child just couldn't seem to grasp their personal sinnerhood but desperately wanted to get saved. Our oldest son's testimony is the scariest because even after he made a public profession of faith, he states that he KNEW he wasn't saved. And he put it off for about ten years, fighting the LORD at every invitation, fearful of what people would think. Each child is different, and their coming to Christ goes right along with that.

The individual has to understand that they need to be saved because they—personally—are a sinner. This is so important. One of our children went round and round with this one. When asked why she needed to be saved she said that people are sinners, or that she'd go to Hell. When asked why she'd go to Hell, her reply was because she wasn't saved. This sort of circular talking went on for months. She cried and cried, but just didn't make the connection that she was a sinner, and that Jesus died not just for sinners—as in ALL sinners, but that Jesus died for her sins, for her, personally.

It's important not to push a child to pray "a prayer" or "the sinner’s prayer."  If they do pray, it is important that they understand that the prayer didn't save them. Many people we meet, young and old, will say they prayed a prayer, but they don't even know what that means. They don't understand the Gospel, but because someone told them if they "just pray this prayer" they're saved, that is what they latch on to. Now those people might truly be saved, but they might truly be deceived too.

Never assure a child that they are saved because they prayed a prayer. Even if the date is written down, when they have doubts about it, you must be very careful not to dissuade them from knowing they are really saved, while at the same time, you must tread lightly that you don't give them "assurance" in a false profession. For instance, if the child thinks they aren't saved, ask them why they think this. A few of our children really struggled with this, a lot. I may be wrong, but I always figure that if they think they aren't saved, they probably aren't, or they have done something they know is wrong and need to get right with the LORD. I've taken them back through the gospel and the Romans Road this way if they are saved, the LORD can give them fresh assurance, and if they are lost, might get saved then. Or try to get saved, like our daughter tried and just didn't get it, until later on.

When our children make a profession of faith, we've told them to write the date down. A few of them have had a number of dates written down because for some reason they "really got saved."  Eventually they all, as far as I know, are certain they are saved. Maybe they got saved when they first prayed to be saved, maybe not. The important thing is that even if they have to "be saved" over and over, don't discourage them from it.

There were two little girls in our junior church. They were twins. Almost every week they come forward to be saved. I prayed with them almost every week. It took about a year before they stopped going forward, and really seemed to know they were saved and couldn't lose it.